From Lemons to Lemonade

Well first of all, as far as the girls and I go...we've kind of slacked off of school work since we are 4 days away from Christmas! They couldn't be more excited! Thanks to my husband's family they have been receiving Christmas packages one after the other all week long.

I had a "mommy snafu" moment that my 6 year old was more than happy to correct me on. So here goes: their room was/is a mess and I can't think of bringing new toys into a room that is so disorganized so in an attempt to persuade and motivate them to clean it before Christmas, I said to them "if you guys don't get your room clean, Christmas is not coming to our house!" Now there was a little bit of build up to this point, like telling them over and over to clean their room since Thanksgiving.

At any rate, Madison comes in  with a most concerned look on her face and says in such a sweet voice, "I thought Christmas was all about celebrating Jesus' birth?" Can you say..."snafu!" I saved face, I think, by saying (in the same tone, I might add) "that's right, we will celebrate Jesus' birth, but we will not open any presents until your room is clean!" How awful is this story?? LOL! This was about 7 days ago...the room is still messy with only 4 days to go. What do you think will happen??? Mommy the Teacher will soon be Mommy the Cleaning Helper in about 2 days!!

We did finish our Long House project. We covered it in brown paper bag and then sparsely added some pine straw for a wooden effect (it was easy and quick). 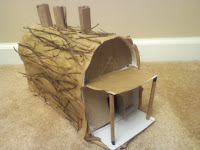 Chelsea was waiting for story time one night this week and decided to get up and pull a book off of her bookshelf and said that she would read it after I read my story...and she did! She read a book called "Todd's Day God's Way" I was so very proud of her. She's doing very well!

We had pajama day at co-op along with a Christmas breakfast while wrapping presents and making Christmas cards for orphaned children in downtown Atlanta.

We've been in a baking frenzy! We baked some special treats for some very special people! We've made short breads, oatmeal walnut cranberry cookies, ginger snaps and a very special one that I am not ready to unveil because of certain readers of my blog who we want to surprise. I will say, it is our very own recipe, one that we had to create to get the texture and taste that we were looking for and according to my husband, they are perfect! Yay! 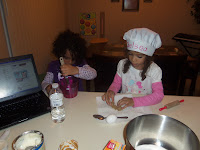 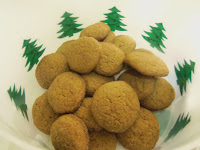 The girls made a ginger bread house. I briefly entertained the thought of baking our own until I read a very funny article in Atlanta Parent Magazine. In light of this mom's experience with warped ginger bread walls, I opted for a pre-fab house! Hansel and Gretel could not wait to desecrate it of its goodies either, before the night was done, there was nothing left but the icing on the poor thing. 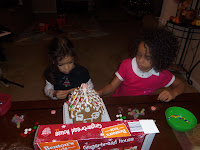 I took the girls Christmas shopping for each other, their cousins and a couple of friends. Thankfully they had money saved and could afford to get that many gifts. It was a good experience for them and I left with a headache but I will do it again and again, year after year!

We did our Christmas cards this week also. I wanted to show the girls doing what they love: 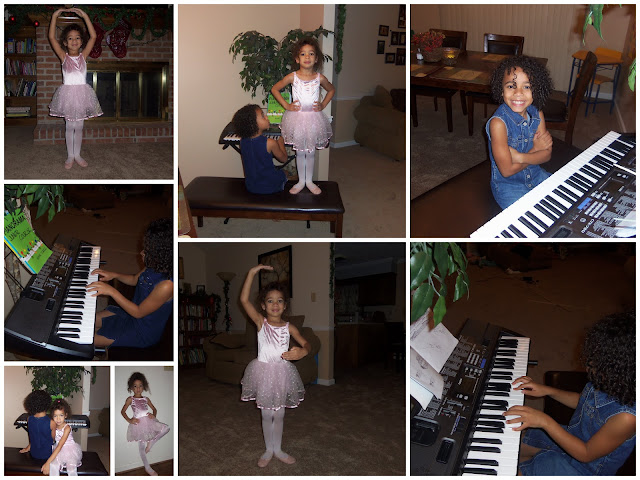 Lastly, this week also came with its trials of faith and perseverance, hence the title of the post and opening line. My husband has continually expressed his awe of my ability to keep things moving when he feels, I should probably be a little more expressive emotionally. I am not a robot, I do "feel" but I think that sometimes situations surpass my level of emotional expression and I just have to "keep it moving." You know? Some situations are so huge that mere tears do them no justice. Maybe it's called internalizing, I don't know.  But...

I buried a wonderful uncle this week. A man that added so much to my life during childhood. He was that uncle that whenever he was around, you just felt safe. He will definitely be missed but we must keep it moving.

Two or three days ago, my Daddy was diagnosed with colon cancer. Now I see where I get that strength that my husband stands in awe of. It's from my Father! This man is amazing. He's never been sick and did not flinch when the Doctor came in with this initial report. I love it! He's lying in the hospital bed but still refuses to be waited upon past a certain point. I understand that soooo much!

Some might say; well he should "deal" with what he's heard and come to terms with it. I'd ask "why?" My Daddy says you don't give in and you dont give up; and with good reason.

He had surgery last night and today the report is..."not cancerous!"

What a blessing! I'm sitting with him now in the hospital and even sleeping...he's that same silent fighter that I've always known him to be - this must be where I get it from.

When things happen in life...you've gotta keep the right perspective. Lemons are definitely sour (no doubt about it) and hard to bear in and of themselves...but if you just keep looking at them, you'll find something very palatable to do with them. You may have to look hard, you may have to squeeze and squeeze and squeeze but I believe in nearly every situation there is good to be found or at the very least...created/made...out of something sour.

Linking up at Collage Friday, WUH, and Homeschool Creations!


Posted by MommytheTeacher at 9:22 AM