10 Reasons I Love My Husband

If I had the time, I could quite possibly come with 100 reasons why I love this man. But to keep this post readable, I'll stop at 10. First, some background information. Phillip and I met officially in 1999 while we both worked for the church that we were attending. I believe with every ounce of my heart that our perfect God ordered our steps and is completely responsible for our "meet-cute". I don't like that term but I learned it from watching the movie The Holiday with Jack Black and Jude Law and  Cameron Diaz.

At any rate, I remember the day that I walked in the break room while Phillip read his Bible and ate  his lunch. That was the beginning. 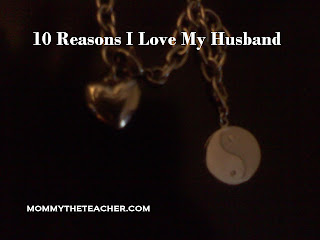 A short time after, we became very good friends. We talked about the Bible and God's plan for our lives a lot. We remained friends for two years until February 14th 2001 when he asked me to be his Valentine. Seriously he did. It was kind of weird, but I went with it.  After that, we dated for 2 years before getting married June 2003. So this year, I will have been married to my best friend for 10 years! Here's why I love him:

2. He's compassionate. He's a compassionate person. He is touched by others' emotional state good or bad. He's for the under dog every time. He considers everyone, never writing anyone off as unworthy. In fact, our youngest daughter is just like him.

3. He's handsome. My Phillip has dark features. Features I'd always found attractive. His eyes are brown, his hair is dark brown (weirdly enough, he has a few red strands interspersed throughout). He has perfectly shaped dark brown eyebrows that set the frame to his deep set eyes. As if that wasn't enough, one of his greatest physical attributes are his firm, chiseled, calf muscles. I can assure you that he's embarrassed now. I remember playing tennis with him and his sister while we were dating and seeing those calves for the very first time. My eyes bucked and I couldn't quite look away for a minute or two.

4. He's the yang to my yin. We are such opposites of each other. We once took a survey quiz that helps to determine your gift or talent...he was on the one end of the survey and I was on the complete opposite end. It works. :)

5. He's a reader. I love this about him. He's not some lazy, doesn't-wanna-grow dude wasting his time on the couch every night. He is an avid reader of books. Two of his favorite subjects to read about are biblical and financial. He also loves a good autobiography.

6. He's an awesome dad to our girls. He's so patient with our girls. He helps to home school them, he prays for them, he looks forward to bedtime stories every night. He kisses boo-boos, attempted to brush hair, celebrates the smallest accomplishments, still working on his disciplining skills but he tries. ;) 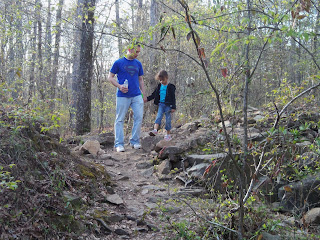 7.He works hard for us. He's held down his full-time job (which included travel), gone to school full-time and maintained a thriving business...all for us.

8. He's silly. He gets it from his dad. But he is extremely silly. I love that about him. If we didn't have laughter in our home, we'd probably shrivel up and die. He does the goofiest dances for the kids, he gives me my own private variety show of ridiculousness almost nightly (whether I'm looking or not) and tells horrible jokes.

We vibe and thrive off of each others silliness. If he starts some crazy thing, I almost inevitably, every single time, will jump in there and take it even further and before you know it, we are in full character acting out some crazy scheme that entered into one of our heads...and by then we've lost track of who started it.

9. He prays for his family everyday. I hear him, n the morning before I get up and at night after I've gone to bed. My heart slows a bit as I take this attribute of him in. I hear it everyday so there's a tendency to overlook it but now as I key these words to screen, I'm having to slow down and breathe in the fact that this man, this male creation of God, spends time alone everyday praying for "me". I'm only one being in this vast universe and every single day there is one of God's creations talking to Him about "m.e." What a privileged woman I am.

10. Its his birthday! This post was hard for me to do. It is so far beyond who Phillip and I are. We are gushy, but in the privacy of our own home. By putting this post out, I feel as if I'm pulling back the curtain and allowing you to peer in. I did not do this post to be a part of a link-up, I did this post because I wanted to honor an honorable man. I wanted him to know that I love every part of him. I wrote this post because I wanted to say, in a special way, Happy Birthday!

With that said, forgive my sappiness this week and thanks for reading.

Oh yeah, what good is a top ten list if you don't link up to Top Ten Tuesday! Linking up there and here. LOL!
Posted by MommytheTeacher at 4:45 PM