We are now official members of the Salt Dough Map Club! 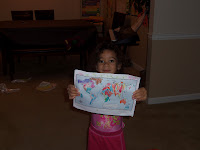 I think we had a Montessori school-day this week. The girls woke up and were super interested in doing maps. My youngest brought home an unfinished map of the seven continents from co-op and was intent on finishing it. Well once Madison saw that, she couldn't finish her math work fast enough so that she could do some map work. So I printed one off of Google and gave it to her and they colored and compared and talked about maps for at least an hour. 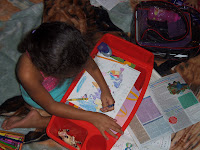 I then showed them some geographical maps of the world and we talked about them and the seven continents. We talked about some specific characteristics of each continent. They were really interested in peninsulas and pointed out all of the ones they recognized. That's when it hit me and I yielded to the forces that "be" or in this case "were"! :)

I figured it was a great day to do our first salt dough map and why not be adventurous and do it of the world. Yeah sure, I doubted myself some but I figured it couldn't be that hard and creatively speaking, what better time to do such a project than when you actually feel inspired to do it versus attempting it simply because it's on your lesson plan for the day? So we dove in. We went to the dollar store and picked up a poster. We busted up a box from the garage and proceeded to use all of the salt we had on hand and half of the flour! :) It was quite the adventure for us!

Oh did I leave out the fact that we left out Antartica and Greenland? :) I totally forgot to draw them in! So I guess it's sort of a salt dough map of the world...

Thanks to this awesome squidoo lense our venture was made super easy! Enjoy our pics below!!!! 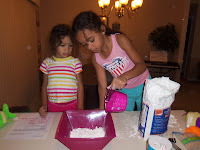 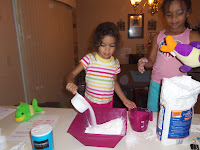 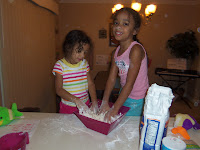 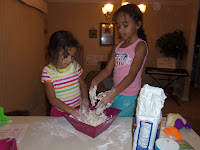 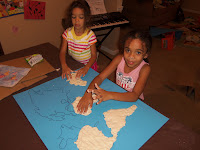 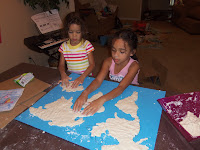 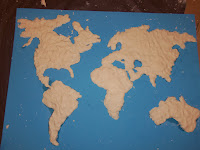 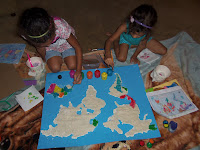 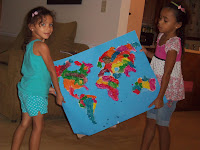 Thanks for reading...come back!
Steph.
Posted by MommytheTeacher at 11:15 AM 12 comments:

Weddings and Funerals and Family...oh my!

Why is it that weddings and funerals make us think about how much better of a daughter, or sister, or brother or grandchild or cousin or friend we could've been?

This past weekend I attended my brother's wedding. It was beautiful. The bride chose wonderful colors. I don't know the official names for the colors but certain female members of the party were in something like a pastel orange sherbert, others in a very light mint green and the men donned ivory I suppose it was. It was an off shade of white. The ceremony felt very "light" and not due to lack of decor or wedding party but the planner was obviously going for the "understated" and it worked beautifully. Oh, yeah, no, I wasn't in the wedding. Just in case you were wondering. This was not a biological brother but a brother just the same.

While sitting there in my seat on the groom's side of the church I started to think about all of the weddings that I'd been to for this side of my family. I'd witnessed my dad's, my uncle's, my aunt's, my cousin's, and my oldest brother's. Mixed in with those wonderful "you may salute your bride" thoughts were memories of sleepovers over the years, summers and Christmases gone by and/or missed. I thought about how I made excuses not to make this family dinner or that one. How a long day at work kept me from my dad's 40th birthday dinner.

Next across my mind were the family members who were not at this particular occasion because they truly couldn't be. Thoughts of his mom flashed through my mind and the fact that she was killed  in car accident shortly after she and my dad married, while my "adopted" brother was only about 5 or 6 and our little sister was just a toddler. I considered that my Grandmother would have definitely been there if she was still here. She hadn't missed a wedding or a graduation of any of her grandchildren until this one. I remembered how less than a year ago, she and my grandfather passed within a year of each other.

I'm a sap anyhow but my sap factor goes way up at weddings. These tears though were a culmination of every invasive thought that entered my mind welcomed and unwelcome. I held them back but they literally knocked and banged at the doors of my eyes threatening to break the levees and flood my face with with both wonderful and regretful emotions.

But I didn't. I didn't cry, instead, I held it together. I took in the fact that I hadn't made every occasion but I was at this one. And I decided to BE there. Not in the past, reliving and regretting decisions of my youth or  of self-centeredness. Then that's when it happened...my day was made when he and his new wife walked down the aisle hand in hand and as they approached where I was seated in the church, he reached out and hugged me and thanked me for being there. At that point, my tears were mocking me and teasing me as the rim of my lids began to moisten, I refused them and smiled and whispered a most joyous and sincere "I love you so much" into his ear. That moment...that one, I will never forget. Nope, I will add it to my repertoire, my arsenal of meaningful family moments so that when regret and disappointment  try to nag at me, I will remember to forgive myself and live in the present.

What's the lesson for me? What was my take away? What did I learn from this experience that I hope to teach my children.

I hope to teach them how important it is to remember.   Remember your family. Remember to forgive and forget. Remember to support and to be appreciative of each other and of family in general.
Posted by MommytheTeacher at 6:09 PM No comments: