As a few of you know, I started home schooling last January. My biggest concern like most newbie home schooling parents was...will my child know how to interact with other human beings if I decide to home school her.

Madison was in public school for about 5 months before we felt that we undoubtedly needed to consider an alternate choice of education. Although we'd said we were sure we were going to home school our kids, when the time came to "put up or shut up" it was sort of a big deal.

There I was staring changing the course of my child's life in the face. The confidence that I'd read on home schooling blogs, heard in the voices of parents who were already home schooling, and read about in books was just not so present in my mind and heart when the time came to fill out the withdrawal form that I'd picked up at the office of the Department of Education.

My Thoughts Then
I was convinced that this was the best choice for us but then I just wasn't 100% sure that it was the right choice for her future. You know? I was heart-thumpingly concerned about whether or not she'd turn out "weird."

As much as I wanted her to have the very  best education that we could provide for her, and as much as I wanted to be the one to give it to her, and no matter how adequate I felt at taking on that task knowing that with this one decision, on this one day, I was not simply taking her out of the only choice for education that I'd ever experienced (believe me that was huge enough); I felt that I was changing the course of her life.

That on this one hand, she'd have tons of friends, regular exercise, music class, art class, and sports and clubs to be a part of and turn out "normal" like most people. It didn't help that she'd entered a poetry recitation contest at her school and won for her grade level either!

Then there was my other hand where I was aware that she'd be home with me and her "younger" sister everyday. I was thinking, 'that's good for Chelsea but how could this be good for Madison'. She'd get all of her idea of what's right or wrong from one person...me! She wont be able to go to the cafeteria, pick up her tray, stop by the condiment bar, fix her little food and walk to her table like a big girl anymore (o.k. that's not so important but it was sooo cute to see her do that). One of the biggest though was that I wouldn't get any feedback on how she was doing. She wouldn't be at the top of her reading class and if she turned out to be gifted, no one would know (pride, I know, but true). She wouldn't be moved to the gifted class (again, pride). Another big concern was that since I'm a home-body, she'd be a home-body. These thoughts bombarded my mind with reckless abandonment.

While I was wholly convinced of the benefits of home schooling (there are soooo many), I was also well aware of the perceived down-side of it as well: socialization or the lack thereof.

My Thoughts Now
Now that I've been at this for a solid year and have experienced some growing pains, learning experiences, ups and downs, ins and outs, all arounds and what abouts. I'd like to pen some thoughts to paper or key them to screen, as it were. (smile)

I've actually noticed the opposite with my girls. When we are out at the Library or a Museum or the park; I notice that my girls are just as likely if not more likely to approach another child or start up a conversation. I'm not exactly sure why that is, but the concern that I had has been debunked so seriously hard that it shocks me.

My brother is weird. He went to public school and he still marches to the beat of his own drummer. He always has and that didn't change although he endured 13 years of public education. He's bright, plays 3 instruments, flies huge model air planes (as a hobby), served in the Air Force aboard the AWACS which is a surveillance aircraft for the Military. He works in IT.  He's a father. But he's quirky. That brings me to what I think was the most eye-opening truth about socialization. If a child is shy, they will most likely be whether they are home schooled or public schooled. If they are "quirky" that may just be who they are and has nothing to do with the type of education that they are privy to. One of my best friends is majorly quirky! She was public schooled, she home schooled her children and they seem more "normal" than she is. (smile)

There are so many groups to get involved in academically or just for extra curricular activities.The idea of an unsocialized home school kid is all but a relic of the past. As one of the ladies at our co-op put it, "that's so old school."  So for the many, many moms who will begin your journey this year, don't let the idea that your child will somehow turn out to be weird, socially inept, or in some way crippled by your decision to home school him or her to stop you. It's a farce! Take it from a Mom who was terrified of the thought. My children have had more than enough wonderful opportunities to meet and interact with wonderful kids. And we did not have to join every group in town, do every activity under the sun, live at the library or go on a field trip everyday in order for that to happen. We simply live our lives expecting God to order our steps and this year has been a phenomenal year for me as well as the girls.

Thanks for reading...hope you were encouraged! Linking up at Hip Homeschool Moms. 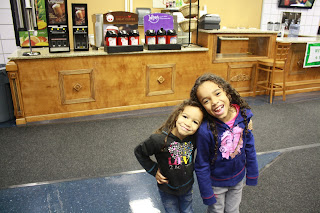 
Posted by MommytheTeacher at 7:04 PM