Wow! This is therapeutic!

It's really helping me to organize my thoughts regarding why I'm making the decision that I'm making. As I said in the post before this one, we'd always and already determined that we would educate our children at home before day 1 of public education but still after a few months in the system it was difficult to say "hey, we are pulling the plug." It seemed so definitive and life changing for her and us. It was not something that we could enter into half-heartedly (although we'd already thought, talked and prayed about it). It still needed more thoughtful consideration in "my" mind.

After or actually during the scoring issue were other little issues popping up. There was an incident on the bus with her and a little boy. Thankfully I'd drilled her on how to speak up for herself in this area. Nevertheless, I had to talk with the bus driver about it. Then came a hint of bullying...FROM A 5 YEAR OLD!!! A little girl in my child's class, on the playground one day, said to her "I'm going to beat you up when you become a teenager."  I know there is no chance of that ever happening but she's a 5 year old talking like this!!! And there is so much talk about bullying going on in schools today maybe we are all a little hyper-sensitive. I wasn't really shocked because I know how kids talk and I know that kids of all ages and can and are exposed to all sorts of ideas and situations that shape the way the behave but there I was again, having to talk to the teacher about something else. Which, I wouldn't have brought it up except this was the 3rd time something had come up with this little girl and my kid. While talking to a friend one night, I realized, "hey, I don't want the next 12 years of my life to be about running to the school to "talk" with an official about something that's going on with my kid!" I mean, I felt like the precedent had been set. Was this what being a concerned parent in the public school system is all about? Putting out little fires so that they don't grow. 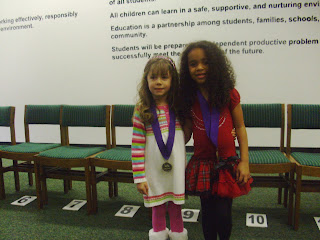 Madison and her BF from Pre-School at Poetry Recitation

Now granted, we had good experiences also. Madison participated in the school poetry recitation contest and ended up representing her school at the county level and ran into her best friend from pre-school while there. That was fun, she won second place out of about 16-20 kids. That was fun and we have some great memories from it.


All in all, at the end of the day, I think I am just too interested in my child, her education and her future to just turn her over everyday to a group of people who don't have her best interest at heart (it is impossible for them to). Alot of teachers are just trying to meet the status quo these days. There is so much paperwork and added stress from our government that their hands are pretty much tied when it comes to teaching and reaching the children and we just want more.

At the end of the day, I believe that I can do a better job with my own children than any teacher ever could. I mean, I know that Madison can do anything that she puts her mind to but needs to be pushed kind of hard to put forth her best effort in something that she may not be interested in. I know that although she has a love for learning, she gets bored with repetition but excited with new information and about acquiring new skills. I understand that Chelsea is not all that confident with what she knows until she gets a couple of answers right and a little bit of praise. I know that she does not learn well in a formal, sit down setting but that she picks up more information in passing than she ever would sitting at a table for 30 minutes to an hour. It's just not her thing. So through homeschooling I can tailor their education to fit their personalities. I can train them for their "individual" futures. Should a gift or talent or strong desire arise in them, we can feed those things while teaching them the necessary skills for life and college and the work force. It makes sense to us.

Gosh, there is so much more to say about deciding to home school...until next time!


*Do you find the concerns about public school valid? Why or why not? I'd like to hear what other parents with school-aged children think about the state of our public school system.
Posted by MommytheTeacher at 6:36 AM