I’m laughing to myself right now because Stephanie has no idea that I’m “hijacking” her blog with this post. LOL

To all of Stephanie’s regular readers, this is her husband Phil. In honor of Mother’s Day, I wanted to do this post as a meager attempt to pay her back for the awesome post she did about me a couple of weeks ago. Man, I have a good wife. :)

I really could make this list go on ad infinitum, but I’m choosing ten of the most stand-out reasons for the sake of (or at least the intention of) brevity. So, here goes…

1. She is my absolute best friend in the whole world. This counts to me probably more than anything else, so I figure it’s a good place to start. Stephanie & I started our relationship as friends. We were friends for 2 years, and then dated for 2 years, and then we got married. Through all of our ups and downs (and there have been some), the one thing that has never changed is the fact that she is my ace, my “running buddy”, the one who I know will ALWAYS have my back. She truly is the most loyal person I know. I value our friendship more than I can put into words.

2. She is an AWESOME mom to our kids. Believe me, whatever great things people may see in our children, whether it’s their manners, intelligence, etc., it’s not by accident; it is largely due to Stephanie’s involvement with them. I have seen her go to near-unimaginable lengths to make sure that they have what they need to have, that they learn what they need to learn, and that they become the children that she & I desire them to become.

I have to tell a quick story regarding this point: A couple of Halloweens ago, our kids both remarked that they wanted to wear Princess Celestia costumes (My Little Pony fans, unite!). We couldn’t find any in the stores—to this day I’m still not sure if they even make them. Do you know what my wife did? She studied pictures (and our girls’ action figure) of Princess Celestia and literally made the costumes from scratch. She created the crowns, the colorful hair, the “hoof guards” (I guess that’s what they are), and everything else. She had to measure our girls like a tailor to get it done. She’s not even a “seamstress” per se, but just her love for our children would not allow her to rest until she had hand-made those costumes for them. Here’s a picture of how they turned out: 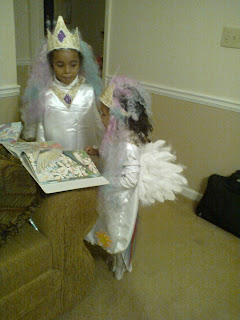 Posted by MommytheTeacher at 9:43 PM